Aishan Patil - Champion in Classroom
The 2014 annual Student Awards Night were held in Summerhill College on the night of October 17 2014.. The event was organised by Mr Derek Wynne and his hard working committee. Guest of honour on the night was past-pupil Aubrey Dolan, Senior Product Manager Football, Adidas.

Aubrey, who won an All-Ireland college's title with Summerhill College in the company of Sean Flannery and Conor O Grady. He is currently based in Germany and has been in charge of design of boots for such football legend as Lionel Messi.

Aubrey recalled with fondness his times in Summerhill and envied the current students the amazing new building with its incredible facilities. He advised the students to push themselves, to get comfortable outside their comfort zone and to remember their unique selling point was themselves. Bishop Christy Jones was also in attendance as were Rev. Michael Devine from Florida, Rev Dr. Michael Duignan, Chairman of the BOM and Mr Liam Mc Gurrin, Chairperson Summerhill College Parents' Association.

Awards were presented to students in the academic, sporting, cultural and general extra-curricula areas. The two top awards on the night were Sport's Person of the Year and the top award of Student of the Year.

The Student of the Year Award went to Aishan Patil who obtained over 600 points in the Leaving cert examination. His award was presented by Mr. John Mc Loughlin, Year head of the Class of 2013. 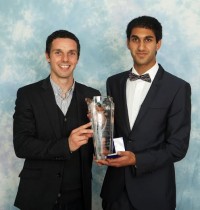